I was born and raised in Massachusetts, in a smallish town in the Connecticut River Valley (or what is known as the Pioneer Valley) called Westfield. Being born a New Englander, a child of New Englanders, a family that can trace its roots back to the Mayflower (Stranger, not Saint), one gets familiar with snow. Maybe not in the same way that Canadians or folks from Minnesota get familiar with snow, or those folks trapped near Lake Erie, but you can count on at least one good snowstorm every year, where folks who are just learning to drive either pass or fail that test of judgment and control. I failed in my first snowstorm – thankfully just sideswiped into a snowbank but wasn’t stuck and was able to get home.

When my parents bought their house, it was summer. My father spent most of the summer fixing things so his mother could live upstairs, and my mother worked. I believe I was 8 that year, just going into 3rd grade. My sister was 7, our brother Victor was 5, and our baby brother Chris was turning 1 that December, the day before my sister turned 7. It was a big house, two stories, an attic and a full basement, on a quarter acre lot on a dead-end street off Route 20. We were a mile from downtown – close enough to be able to walk to the store if we needed to, but far enough away from the noise and trouble that was downtown. There were two beautiful porches, one on the front of the house, and one on the side. There were gorgeous picture windows – there were LOTS of windows. 33 of them on the three stories, including 2 six-foot wide windows. And there was a wide, long, unpaved driveway that went the entire length of the house to the garage. We had a sidewalk to the front porch and to the side porch.

Those windows were wonderful in the summertime – open them up, put a fan in, get a breeze going. The house was mostly cool and comfortable.

It was an entirely different story in the winter. The house was not insulated, having been built in 1922, and those windows didn’t all have storm windows on them. Dad tried, unsuccessfully, to put plastic up on the porches to block the wind. It got shredded. He had better luck putting the plastic over the big picture window on the front porch, but about the one on the second floor, he could do nothing. Our family retreated from the spacious living room into a smaller room that my parents would later use for a dining room. My sister and I had the back bedroom, which was cold because it didn’t have a radiator and it had a closet that also led outside and up the back stairs to the second floor. Our brothers had the room that had been the dining room, which had a radiator AND the chimney from the furnace ran up one wall. Their room was quite toasty.

Our family had a couple of brutal winters in this house. We had one winter where we pretty much just ate the three P’s – Pasta, Potatoes, and Pancakes – because oil was so expensive. My sister and I got a paper route, and I finally realized what happened to the Christmas and Easter tips we got – we were allowed to keep some of it, but I’m fairly certain our parents kept some of it and used it to pay bills.

We didn’t own a snowblower, and we didn’t have any family members with a plow truck. So when the snow hit, and when we were tall enough to handle a shovel, we were sent out to shovel. My father had since enclosed both porches, and the shovels lived on the back porch. We had to shovel the path to the mailbox, then to the front door sidewalk (because we had tenants and that’s how they got in) and then to the driveway. And then we had to shovel the driveway, 30 feet wide and 90 feet long. And then a path around the back of the house to the back of the side porch, because that was the other entrance for the tenants.

Sometimes the tenants came out and helped. Mostly they stayed inside. My mom stayed inside, making doughnuts for us.

She never made yeasted doughnuts – her doughnuts were dropped into a cauldron of hot shortening. They were always just doughnut drops, she never tried to roll them out and form them at all, and they were always spice doughnuts. Sometimes they had powdered sugar on them. More often they were plain or just cinnamon-sugar and butter. Sometimes she burned them a little – which was unusual, but the electric fry pan she used could be temperamental. She would make cocoa, with milk and sugar and baking cocoa (Nestle’s Quik if we were doing well) and we would come in, half frozen, our homemade mittens caked with snow. We would remove the hats, scarves, and mittens she had knitted us and set them on radiators to dry and warm up. We’d plop down and pull our feet out of our boots and take off the bread bags she had made us wear to keep them dry, and we’d wriggle out of our snow pants.

I don’t remember her ever telling us we did a good job. We knew we had, or she’d send us back out without our doughnuts. We never had to ask her if she loved us. She was up, making us doughnuts and cocoa. She made our hats and mittens and scarves, and they were warm and fit each of us well. She made sure we were warm, had food in our bellies, and that our clothes were clean. She remembered what foods we liked best and tried to make that for our birthdays.

Mostly, she showed her love by making treats for us. 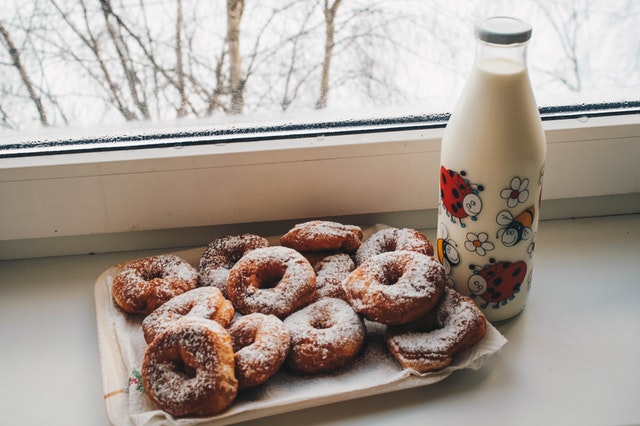